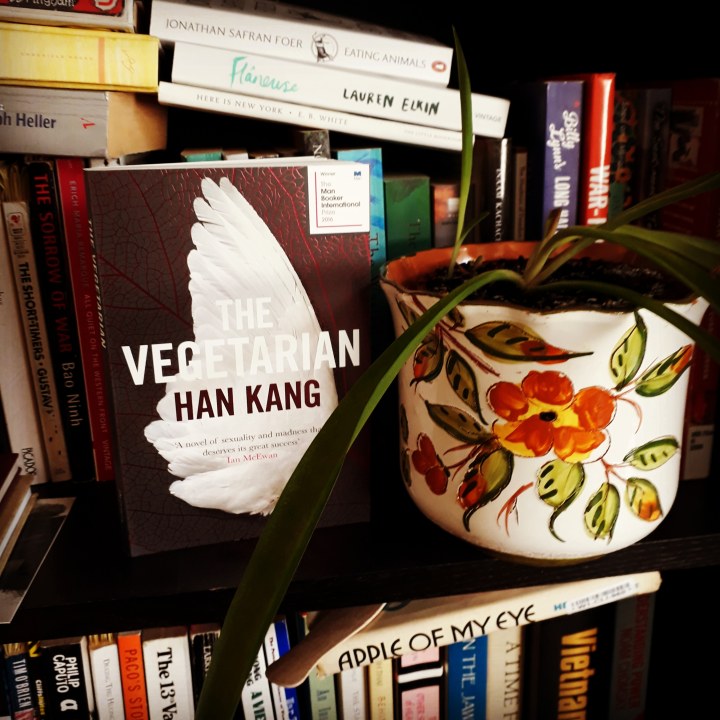 I’ve seen Han Kang and her work all over bookstagram in the recent months and I always thought “Ok, well, this sounds interesting” but without actually thinking about getting one of her books because my tbr pile is still huge. A few days ago Wonderguy brought me a surprise gift, two books: I love Dick by Chris Kraus and The Vegetarian by Han Kang – this is my guy, who knows what I love: good books! 🙂
I leafed through The Vegetarian and wasn’t even sure which one I should start with, but the moment I read the first few lines of Han Kang’s book I was hooked, so Dick had (has) to wait …
The Vegetarian is divided into three parts with three different narrators. The main protagonist, the vegetarian herself, never tells us her story in her own words. We hear certain things ABOUT her, but never from her.

The first time we meet our main protagonist, Yeong-hye, it is through the gaze of her husband, who complains about his growing irritations with her and her lifestyle changes. He is a charming little piece of shit, which gets pretty obvious in “his” – the first – part of the book. Let me use a quote to demonstrate what I could possibly mean by describing him in the best way possible:

“The only respect in which my wife was at all unusual was that she didn’t like wearing a bra. When I was a young man barely out of adolescence, and my wife and I were dating, I happened to put my hand on her back only to find that I couldn’t feel a bra strap under her sweater, and when I realized what this meant I became quite aroused. […] The outcome of my studies was that she wasn’t, in fact, trying to send any kind of signal. So if not, was it laziness, or just a sheer lack of concern? I couldn’t get my head around it. It wasn’t even as though she had shapely breasts which might suit the ‘no-bra look’. I would have preferred her to go around wearing one that was thickly padded, so that I could save face in front of my acquaintances.”

Let me tell you: bras are hell. Next to corsets and shoes that are three sizes too small bras feel like shit and I’m positive that some nasty male designer prick created them out of a deep-seated hatred for all womankind. For any male readers: wearing no bra means feeling as light and free as you feel all the time – like, normal. Now of course, some women love bras, some (think they) need them, and some don’t care much about it, wearing a bra when they want/feel the need to and not wearing one when they don’t want to. As I’m part of the last group I definitely prefer my no bra days, and I do understand someone who doesn’t want to wear one because they prefer to be comfortable rather than to abide to society’s idea of a female standard wardrobe. Whatever floats your boat is fine with me, what I wanted to illustrate here is the fact that Mr. Husband is a narcissist piece of shit – I hope I’ve managed to do just that. But let us move on from this “Ode to the braless life”, because this book is about much more than underwear…

Let’s get back to Mr. Husband (isn’t he a delight to be with?): Seeing the world only in relation to how certain things and actions could reflect on him, his main concern is the behavior and appearance of his wife in public, especially when he is invited to join his boss and other managers at a fancy restaurant for the first time. His wife being the braless, introvert vegetarian she is makes him nervous, and sure enough over the course of the evening he feels embarrassed by her refusal to eat meat or talk to the other wives sitting next to her. Feeling like he can’t take this anymore, he calls her older sister In-hye (after having called her mother before to talk some sense into her daughter, to no avail), the efficient one, the successful one, the one who always does what she is supposed to do. Together they stage a family invention, ending in Yeong-hye’s hospitalization for attempted suicide. We’re leaving Mr. Husband right here, because we already spent way too much time on him and his part of the book is about to come to an end anyway.

In the second part of the book, Mongolian Mark, we start to see Yeong-hye through the eyes of her brother-in-law, which seems like an odd choice but over the course of the story it does make sense … I guess. This part of the book is set two years after Yeong-hye’s hospitalization, as she is now reccovering from those past events. Contrary to Mr. Husband, Mr. BIL remains nameless throughout the book, which is a feature I always appreciate, as it somehow opens up the character a bit, at least in my opinion. So, Mr. BIL is am artist, though not one who lives off his art – he lives off his wife. After discovering that Yeong-hye has a mongolian mark above her buttocks back when he carried her to the ER, he developes a deep infatuation for her, fantasizing about including her in a semi-pornographic work of art. Trapped between his growing fascination with his sister-in-law and his ordinary life with his wife and son, Yeong-hye once more serves as a sort of sheet on which his male ideas about her are sketched. She has no voice of her own and the male gaze once again is the only perspective we have. Though it becomes clear that she is adamant about her eating habits and is fragile in a lot of aspects, especially regarding her mental state, apart from that her story is the story of her brother-in-law (though thankfully, this time it’s not a first person narrator …). And since settings like these rarely end well, let me tell you that it does not end well – ‘I’d like you to model for me’ is nothing one should say lightly …

The third and final part is told from the perspective of Yeong-hye’s sister, In-hye. Four years older than her sister, she was always the responsible and reliable one, and she is the only one taking care of Yeong-hye when her mind and body deteriorate further once she refuses to eat at all. And only now we finally hear about a childhood lived under the constant threat of a violent father, which in the light of the events told in this books seems to connect some dots:

Yeong-hye had been the only victim of their father’s beatings. Such violence wouldn’t have bothered their brother Yeong-Ho so much, a boy who went out doling out his own rough justice to the village children. As the eldest daughter, In-hye had been the one who took over from their exhausted mother and made a broth for her father to wash the liquor down, and so he’d always had taken a certain care in his dealings with her. Only Yeong-hye, docile and naive, had been unable to deflect their father’s temperor put up any form of resistance. Instead, she had merely absorbed all her suffering inside her, deep into the marrow of her bones.

So, one thing is clear: this novel has way too many layers for me to comprehend and I will not pretend that I have. While the fact that Yeong-hye suffered physical abuse and beatings at the hand of her father may explain her increasing withdrawal into her own little world and her growing irritation regarding her physical needs and wants, this is only the peak of the iceberg, to put it mildly. I hardly know anything about the Korean society and culture to understand certain symbols and images. I’ve read repeatedly that vegetarianism is not that much of a thing in (South) Korea, still I don’t understand why it becomes SUCH an issue (yeah, I know, artistic freedom and such, but still that HUGE?). I missed out on a lot of things in this book and I hope to discover new layers and insights every time I come back to it. Some books fascinate us even though we know it’s way out of our league. The Vegetarian by Han Kang is one of those for me.