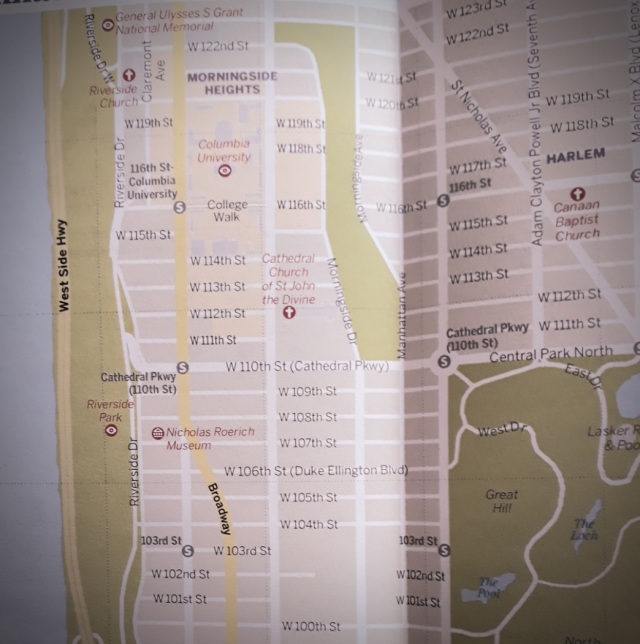 In the last few days I booked a flight and my Dad found me a nice hotel in an ideal location between the university and the rest of the city I want to see and discover. Regarding the practical aspects of this little adventure everything’s already taken care of, everything’s fine. Which is wonderful and I’m so grateful that my dad, mom, and my sister, my whole family, is so supportive and helpful – even though I brought that on myself, thinking I could accomplish a conference/city trip to NYC ON MY OWN.

Wonderguy too is just great, and he’s also already in the “goin’ to New York” mood (even though he is not coming with me), putting together a Spotify playlist with songs about NY (from Sinatra’s classic to my favorite, Alicia Keys, he found some really great songs which I will listen to while out and about in NY). Furthermore, he gave me some of the novels he got that are set in New York, one being Extremely Loud & Incredibly Close by Jonathan Safran Foer. I will take a closer look at this book in another blog post, soon. For now let me just say that certain fears not only Oskar but other protagonists as well talk about resonate deep with(in) my own dark places…

And it can be dark down there … Sleepless nights filled with horrifying visions triggered by too many true crime podcasts and too much war crime material keep me awake. Have you ever seen “Mayday”? I have. Oh my, yes I have …

At the opposite end of this extreme emotional spectrum lies my longing for peace, being someplace where no one knows me, no one notices me and I will be invisible. And once again being invisible would make me invincible, at least deep down in my heart. “These streets will make you feel random” – I long for that feeling. The same feeling I loved so much when walking through the streets of New York the first time I was there, four years ago. No one cares about you, but not in a bad way. Rather like we are all parts of the surrounding, belonging to this street, this street corner, this certain place, nothin’ to fuzz about, just everyone going their ways.

I felt safe there, always. True, I wasn’t out and about at 3am in the morning all alone as a woman, and I won’t do so in December. But still, I felt safer in New York than I felt/feel in London, though I love London just as much and I’m more familiar with the city, having been there several times. And I guess that’s the crux of the matter: because I’m less familiar with NYC I feel safer there than in London – knowing a place, being familiar with it means knowing its ‘good’ and its ‘bad’ sides.

Just reading about the dark sides does not change a thing. I read tons of stuff about war and war crimes and the like but I would never in a million years assume I “know” war – that’s not how it works. Never. Of course I read about places where one should not go, what one should and should not do, especially as a woman, and that might be one reason why I can’t sleep at times, but this does not change my good memories about the place.

Besides, “feeling safe” in my understanding also means being able to stay in my own little thought bubble all the time because I don’t know a single person so no one will disturb my thinking, musing, and wandering. I’m not sure if this corresponds with a general understanding of “feeling safe” but I don’t strive for unifying different views. Live and let live, wander and let wander …

New York, I love you

For now, the “goin’ to New York”-theme is huge, listening to the playlist, reading books from/about/set in New York, most of this thanks to and inspired by Wonderguy. That’s because it’s my first trip alone to one of my most favorite cities. It’s a long flight and at average an expensive stay, so it’s not like I can see NYC whenever I want to – this is something special. And even though I feel total overwhelmed and panicky at times (thanks, weird wired brain) I really look forward to “goin’ to New York”.

Besides, let us not forget: I’m there for work as well … one more reason for sleepless nights! 🙂